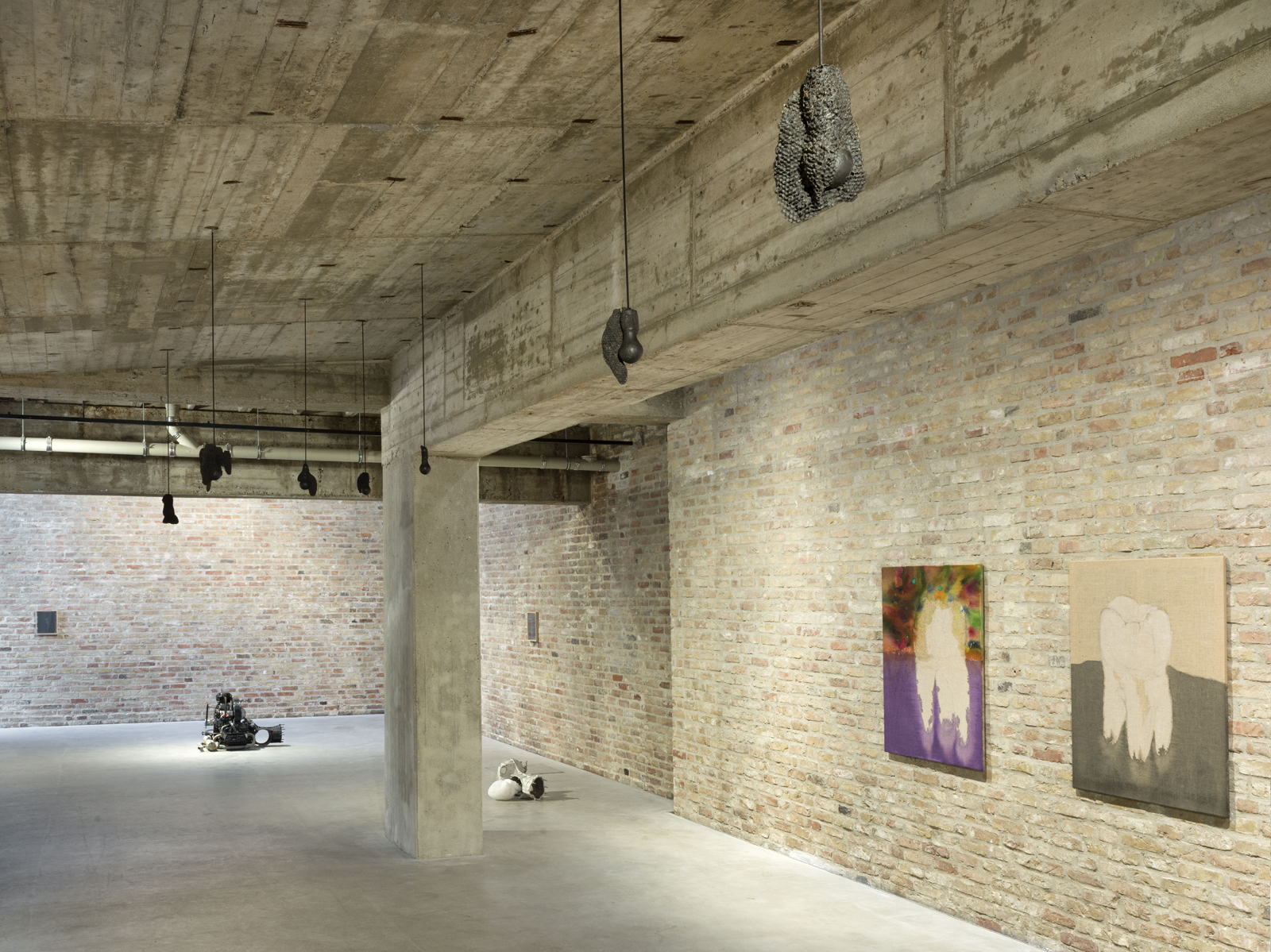 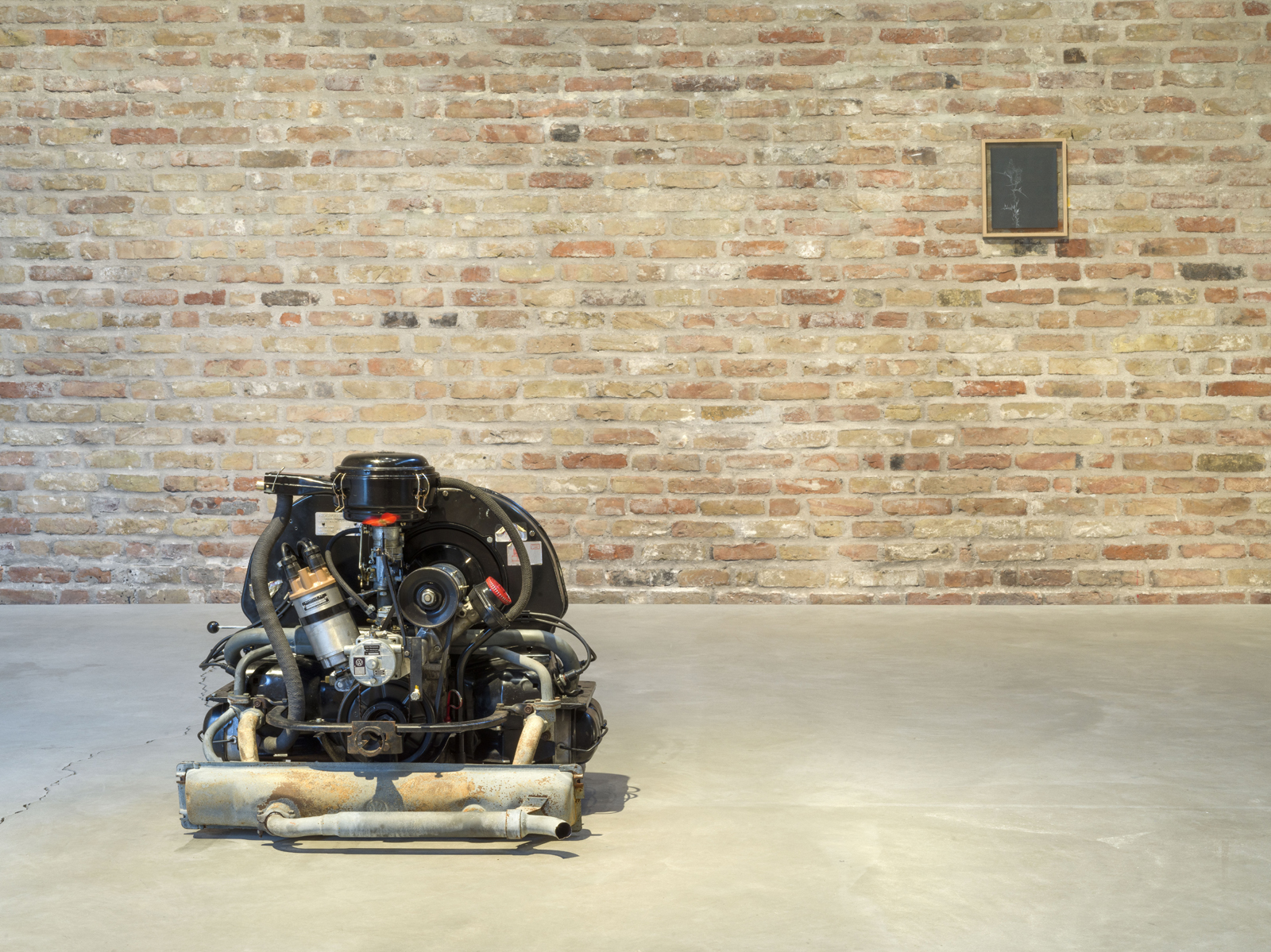 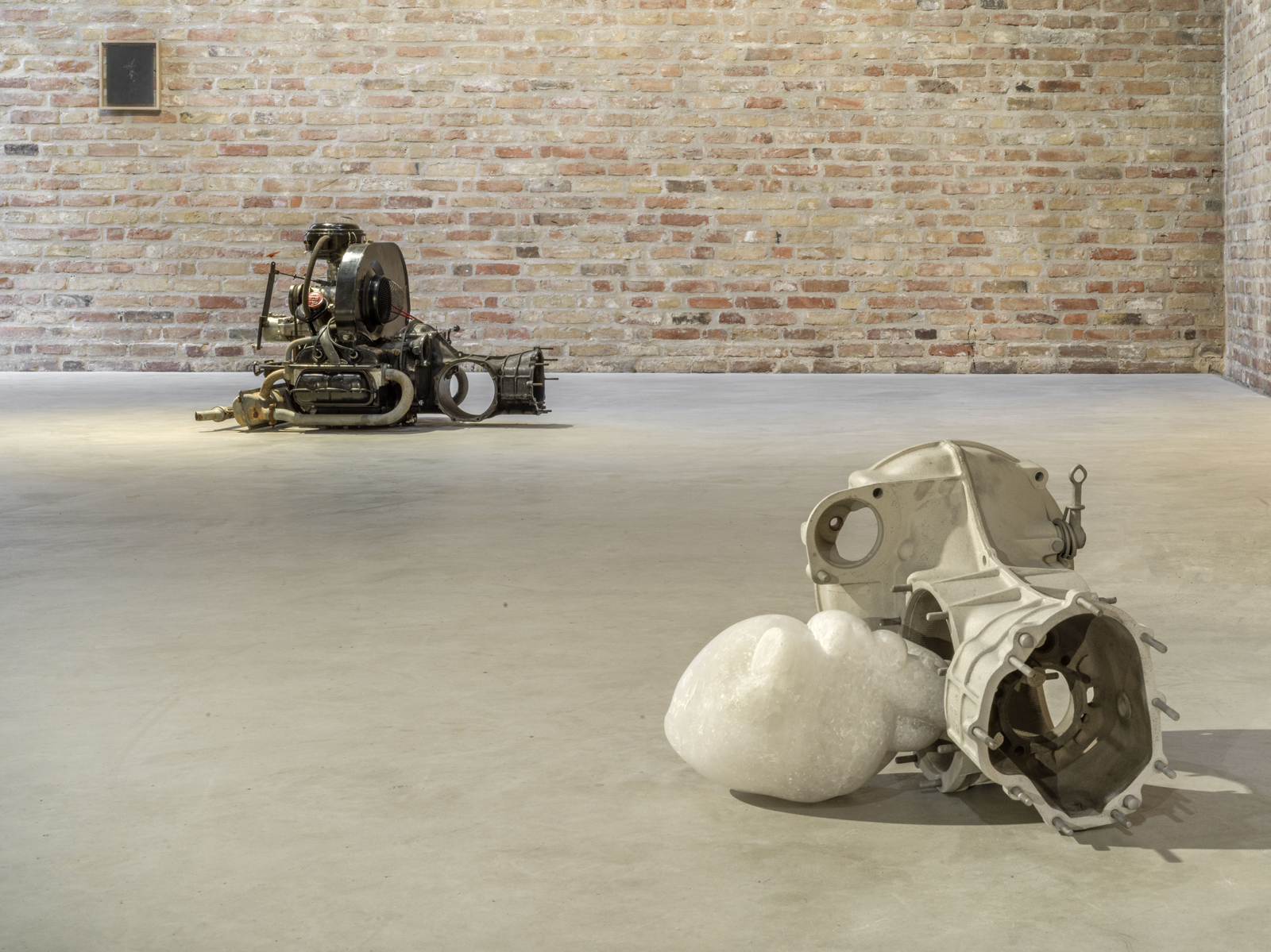 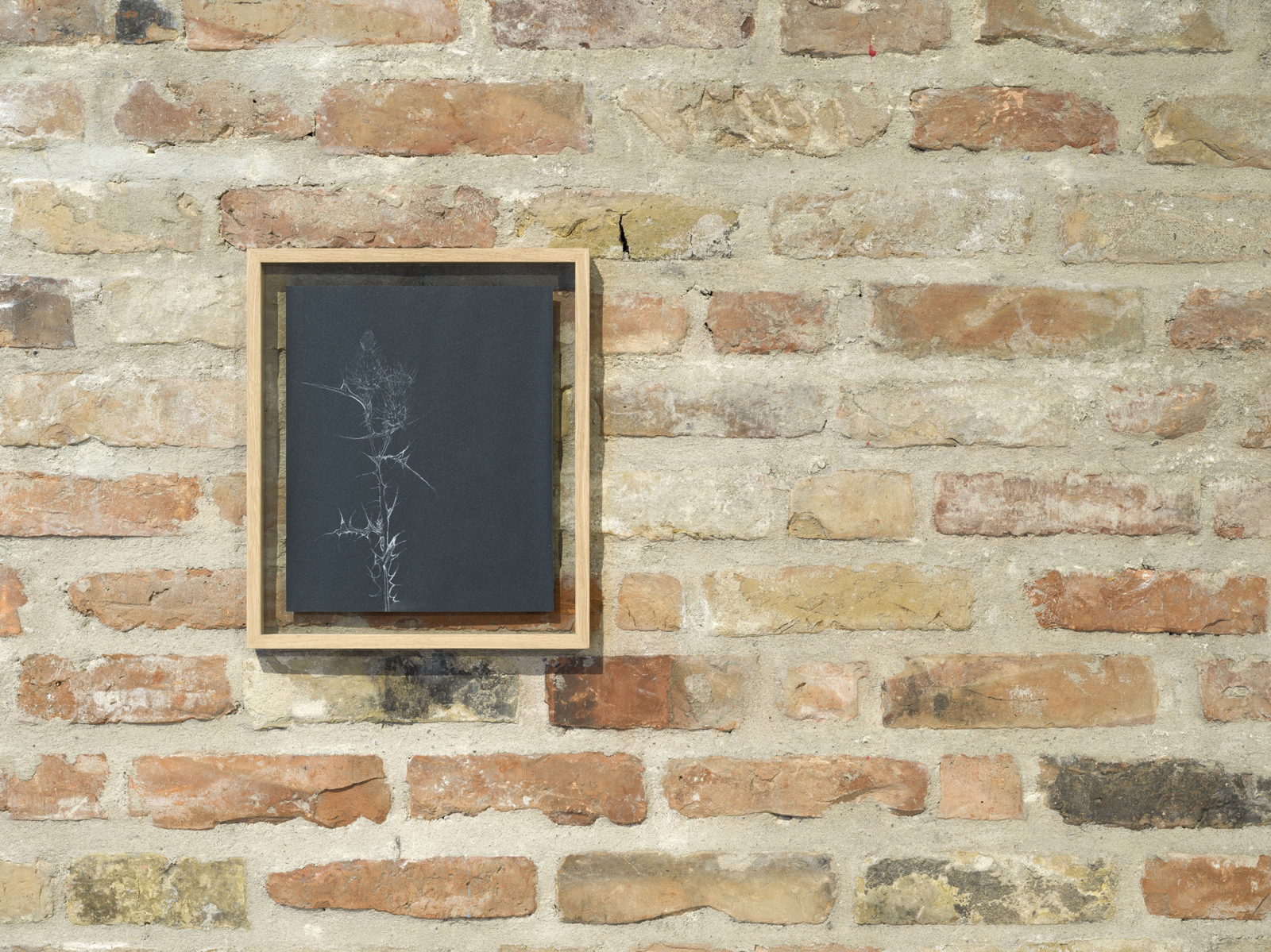 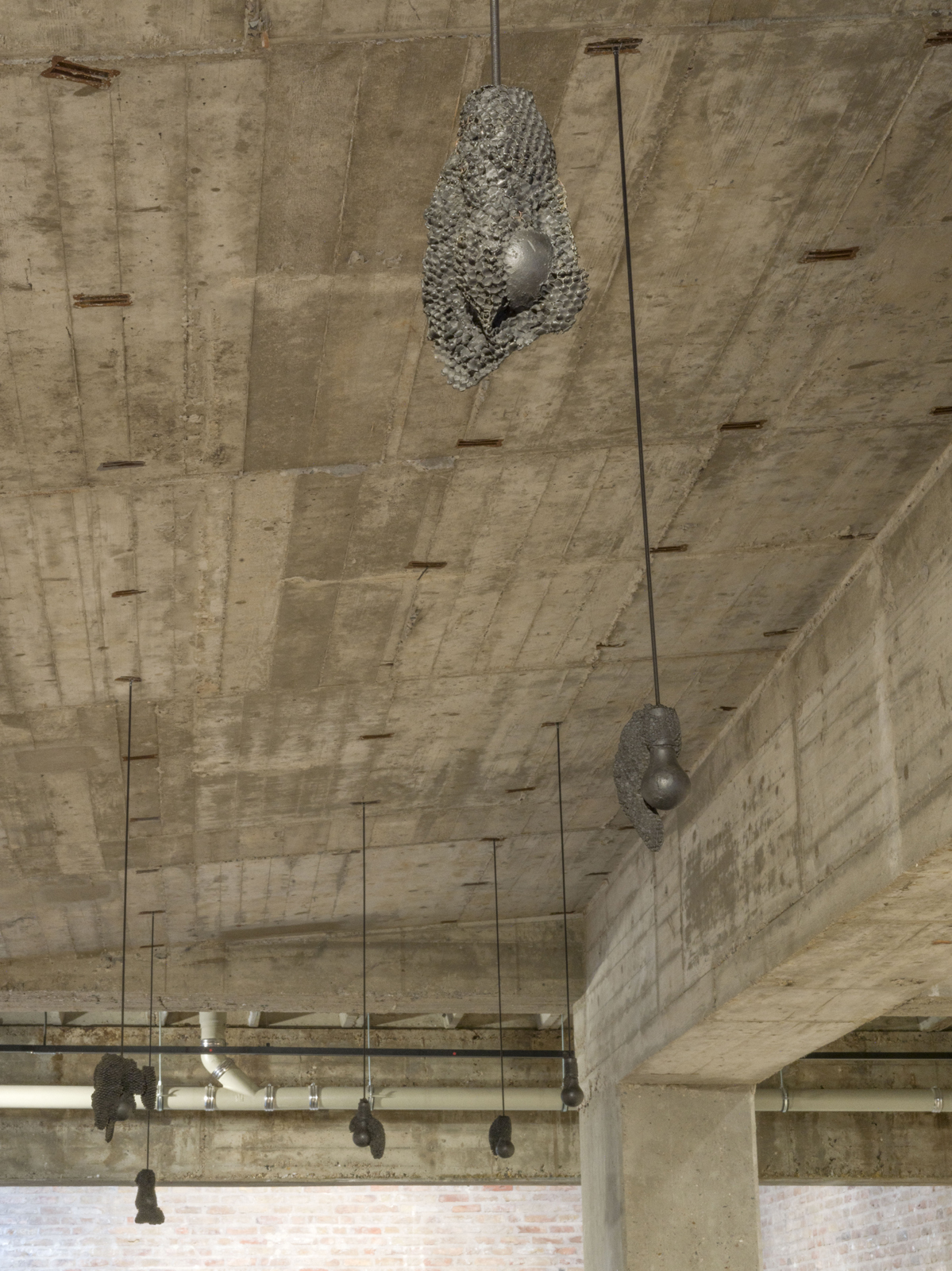 In the vestibule of St. Agnes hangs not a font but a minimalist, square-edged kitchen sink. Beneath the mirror-like surface of its still water, it is gradually dissolving. There’s no way of telling exactly when it will start to drip, nor how long the processes took that gave the stone-like material its particular form. The water-filled salt-stone receptacle welcomes the observer with reserve as the water molecules seep slowly into its salt crystals. In Sink (2019), the geological temporality exercised in the huge pressure of earth sediments temporarily reaches its current contingent form. Shaped much like a standard metal kitchen sink, the sculpture is as unobtrusive as its gradual dissolution.

The work’s protractedness, emphasis or undermining of material qualities and distribution of agency are key characteristics of Michael Sailstorfer’s practice more generally. Over the last twenty years, they have been fundamental to his explorations of the potential of sculpture as a medium, in ever-new quests for playfully serious ambivalence. His seventh solo show at KÖNIG GALERIE takes its title from the salt-stone sink described above. Representing an interim status of a long, ongoing process, Sink, Sank, Sunk also emphasises a semantics of finitude, which seems of worrying relevance at the moment.

For all its environmental references, the visual vocabulary of this exhibition resists simplistic patterns of explanation. The works on show blur any clear distinctions by offering a true reflection of the inseparable interactions of various actors. Above the reception area hang eight dark bronze casts the shape and size of lightbulbs. The unique materiality and surface of Batterie-Feld (2019), however, stem from the different practices and practitioners interrelate. They were created by placing wax moulds of lightbulbs in suitably scaled hives and leaving honey-bees to work on them until their industrial appearance had been totally covered with island-shaped honeycombs. Their forms were then cast in bronze and sandblasted. The resulting hybrid objects constantly oscillate between technical and animal production, their material qualities become interchangeable.

Where the focus is on the natural world, nature is quite obviously attached to artistic practice and consequently has connotations of being culturally permeated. Two sparsely hung, detailed plant sketches — Distel and Brennnessel (2019) — initially seem call to mind the aesthetics of early modern nature observation and ideals of the beauty of nature. But their substrate emphasises their artificiality: the industrially-produced sandpaper on which they were rendered resisted the movements of the stylus, turning the friction between the materials into an expression of the special capabilities of these plant species, which sting when touched. The strokes of the drawings capture a multi-faceted moment of conflict: their endangered materiality is exposed to obliteration and refers not only to the limits of human appropriation of nature but also to its potentially destructive effects.

The main work of the exhibition is Antrieb (2019), which provides a more obvious depiction of the techno-material conditions of the construction and destruction of nature, and their relation to a specific economic system. In the centre of the chapel stands a fully intact, fully functional petrol engine. Before its dark form flutters a blood-red butterfly, dancing in the swirls of a ventilator. Pinned to the carburettor, the preserved creature makes disturbing movements that offer flash impressions of the inventive downside of utilitarian practices: a complex, relational understanding of materiality and vitality. Sailstorfer’s latest works stand in opposition to clear-cut dichotomies: the biological and cultural are represented as permeating each other; a life outside of technicality seems impossible. The entanglement of various actors and the possibilities of affective connection created by their material-aesthetic effects prompt us to consider more suitable forms of common action.