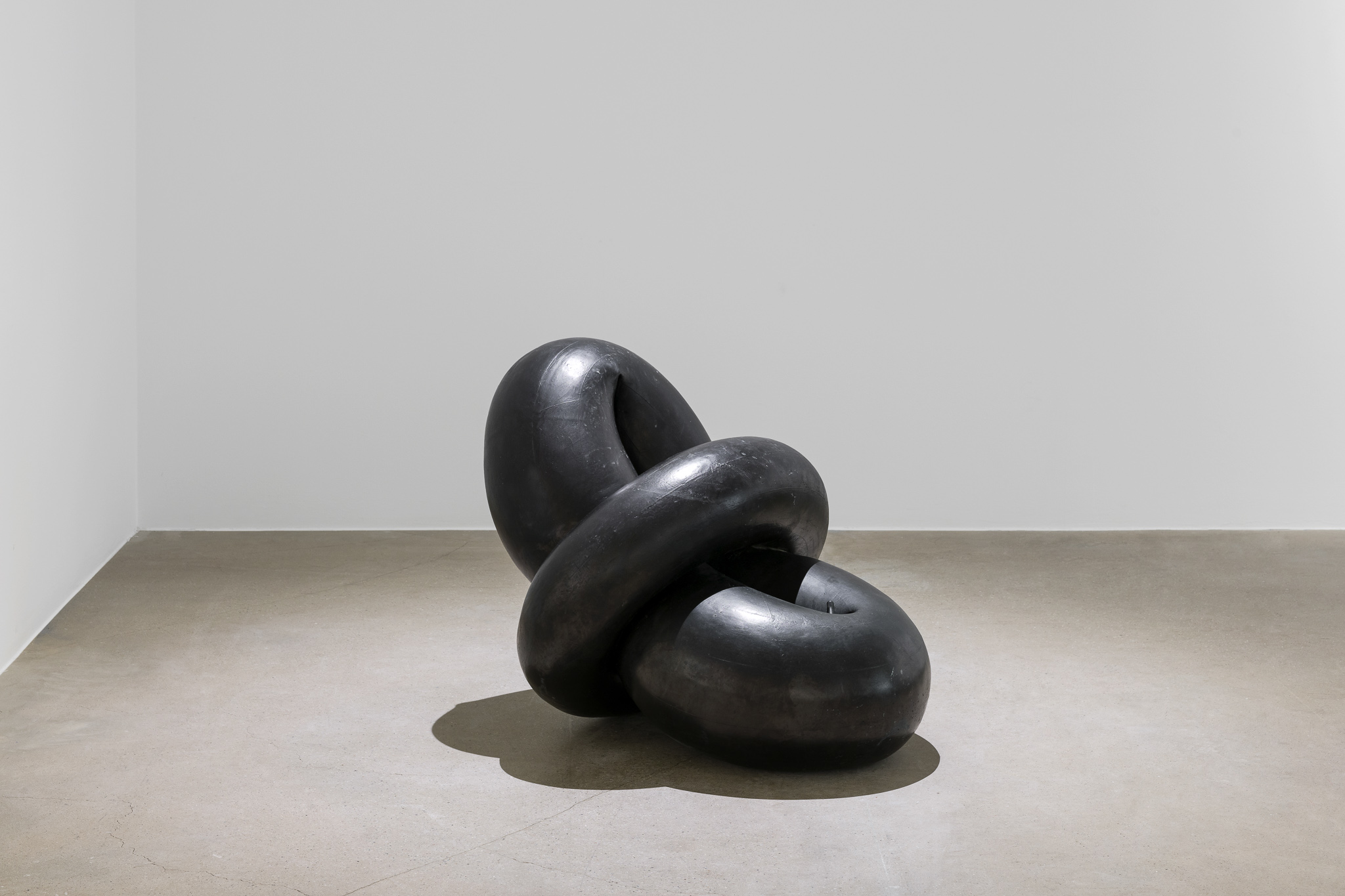 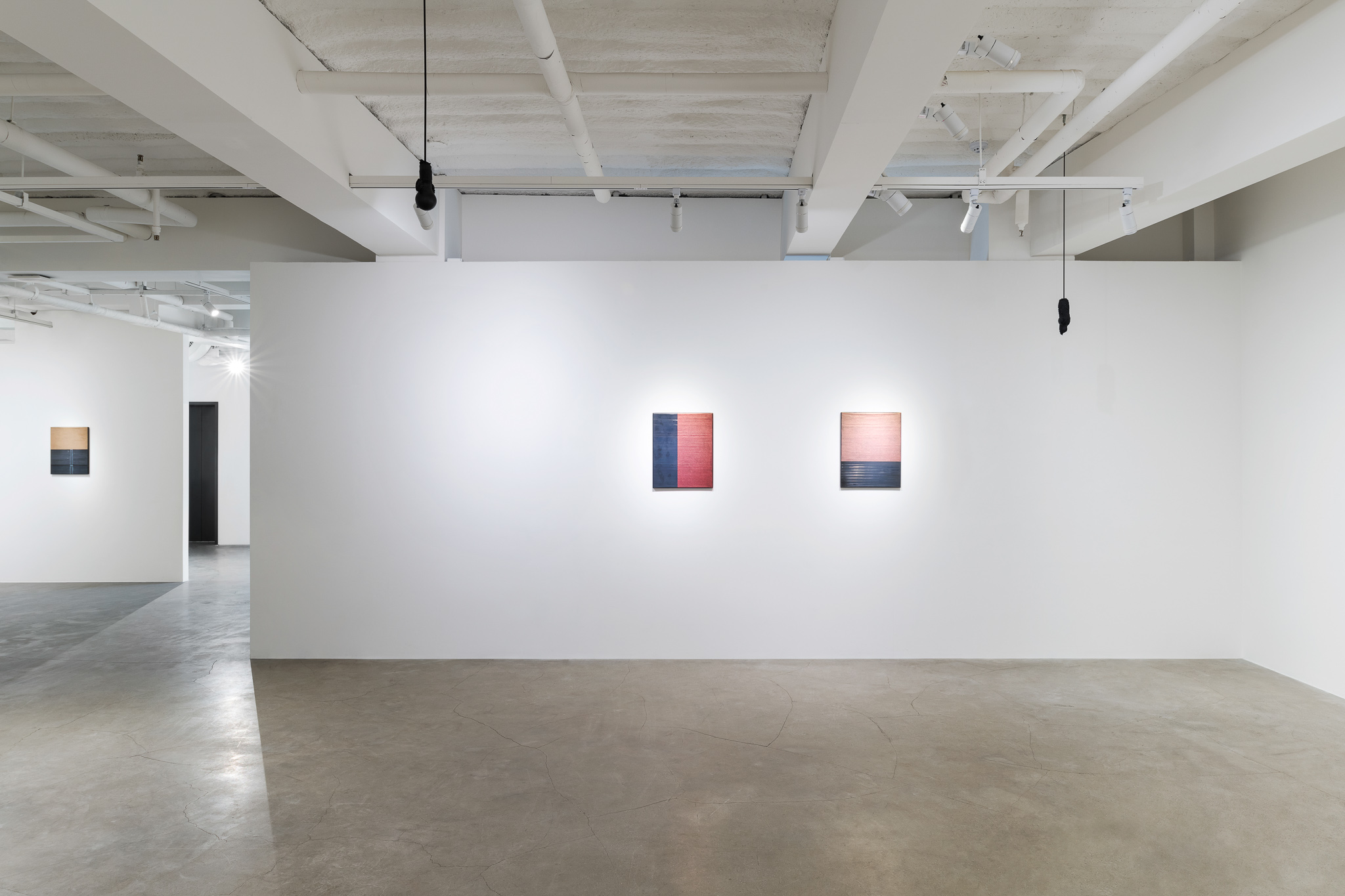 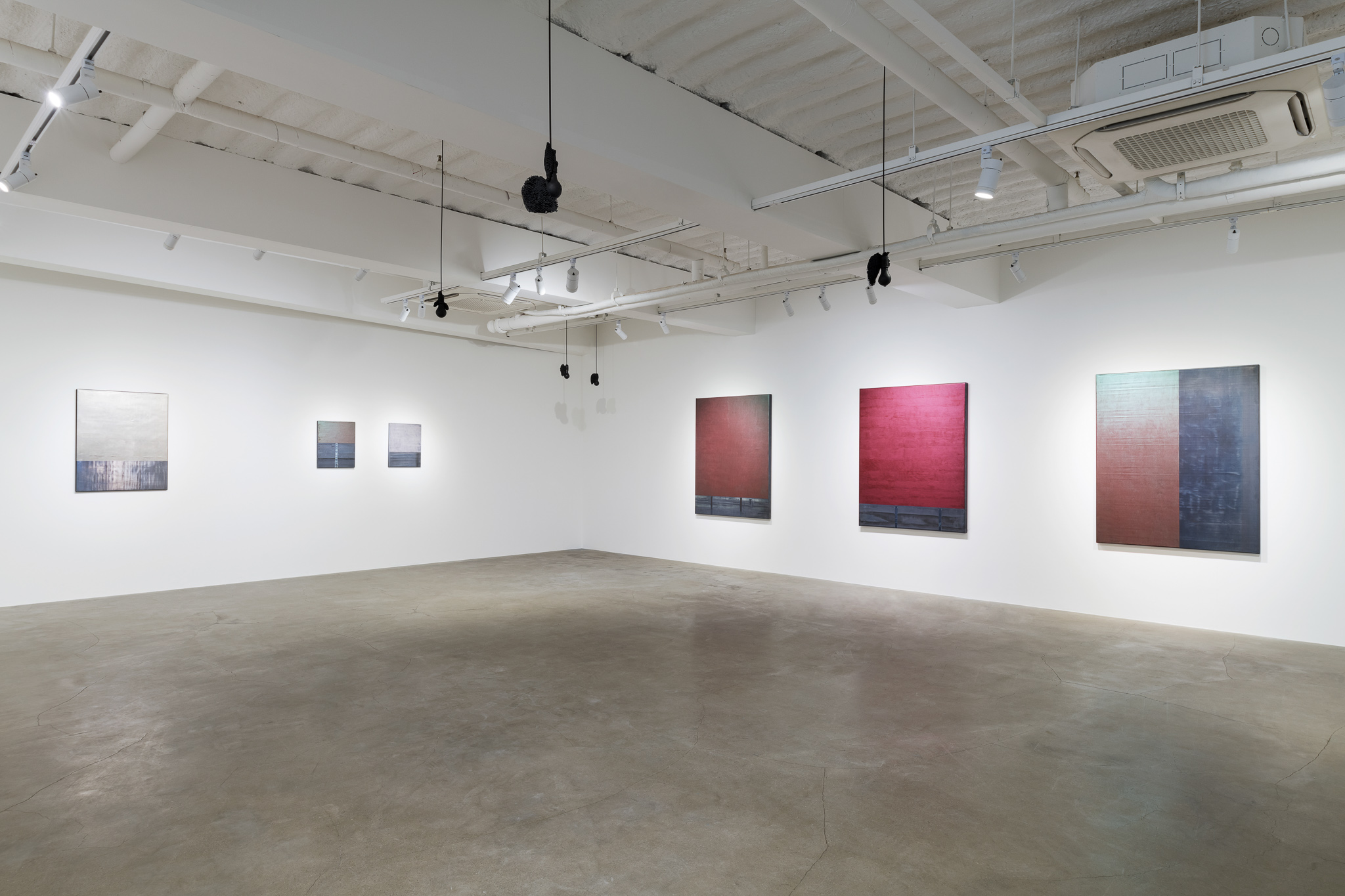 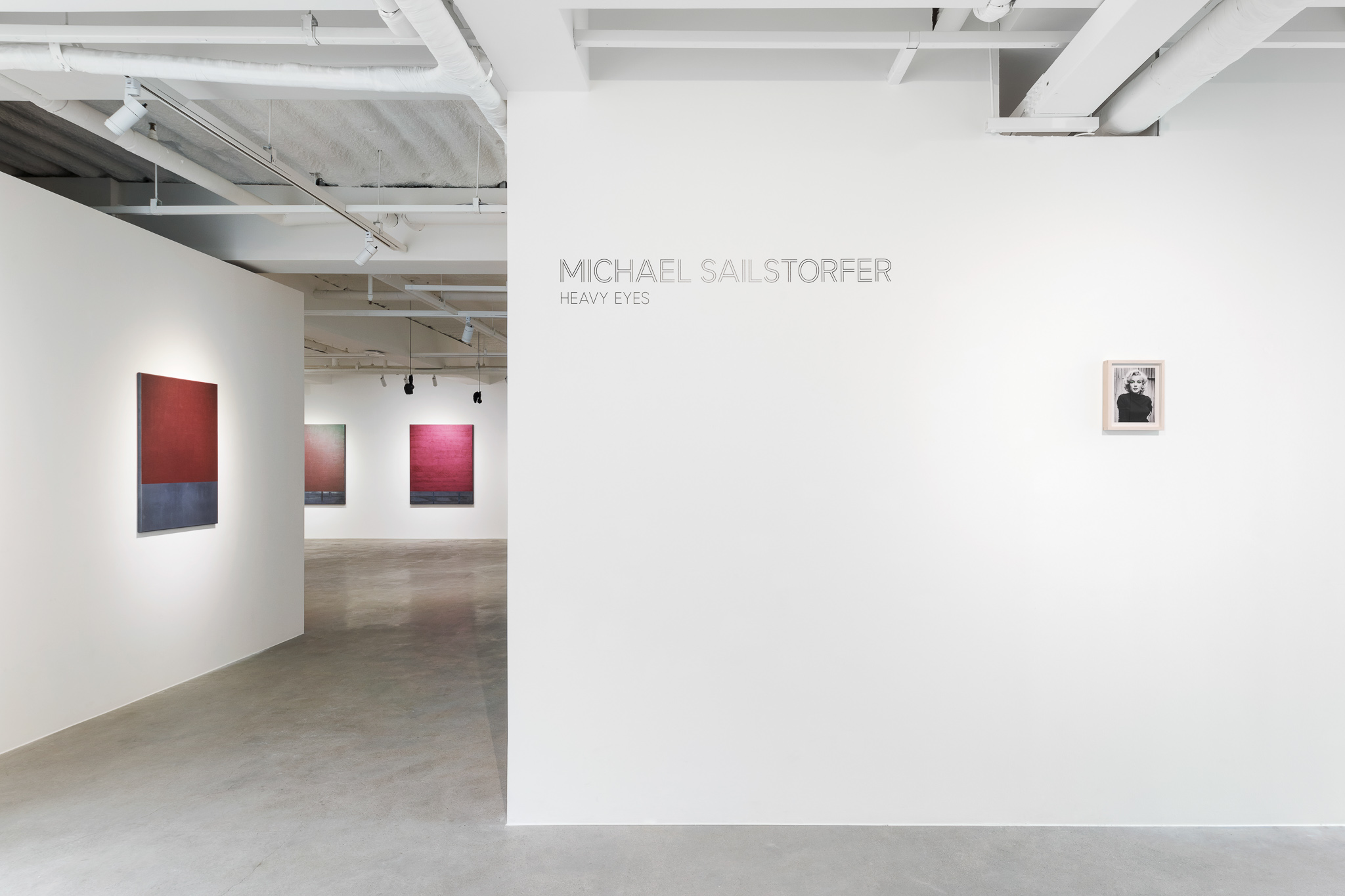 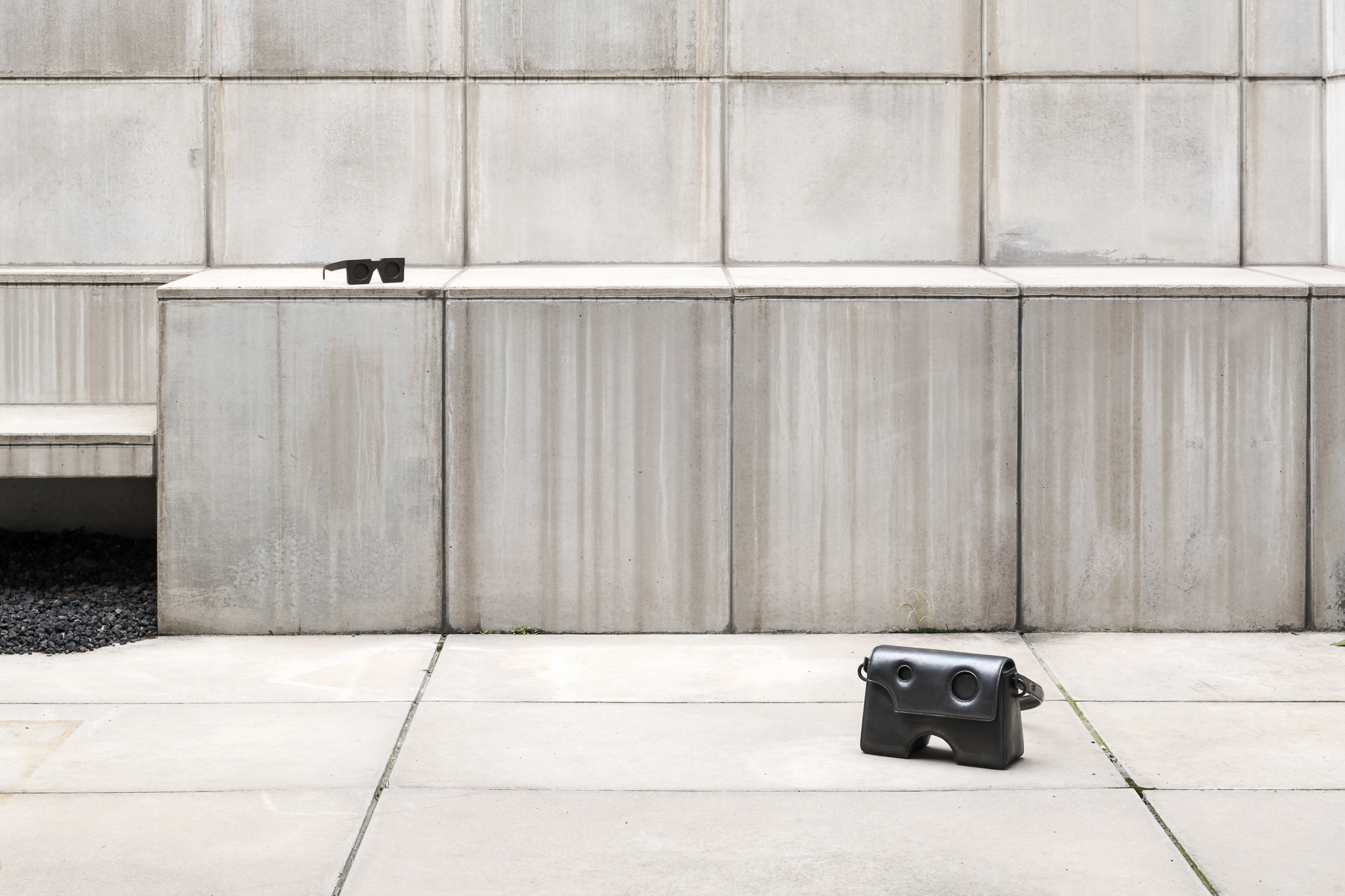 KÖNIG SEOUL is pleased to present HEAVY EYES, the first solo exhibition of Michael Sailstorfer in Seoul. Three distinct work groups – lead paintings, lamps cast in bronze, and other objects, also cast in bronze – revolve around a core tension between heaviness and lightness.

The exhibition’s title HEAVY EYES conveys both heaviness and beauty, though within this framing Sailstorfer still manages to create something light and spirited. He achieves this by playing with materials and their potential meanings, like in the “Heavy Eyes” series in which the artist covered stretched canvases with an incredibly thin (1mm) layer of an otherwise hefty substance: lead. To add to this impossible levity of materials, Sailstorfer then decorated the lead surface with shimmering, metallic eye shadow.

The addition of eyeshadow both hides the dark areas and represents potential glamour and joie de vivre. To further emphasize this idea, Sailstorfer incorporates a famous pop icon into his work: Marilyn Monroe. He reworks a well-known black-and-white portrait of the star with the addition of coloured eye shadow. Outwardly she is radiant, but the whole world knows that things looked different behind the scenes. These make-up works also tie in with Sailstorfer’s earlier mask sculptures: pieces of cardboard, some of which quote architecture, bunkers, and machine parts, which are then cast in aluminium bronze. The artist likes to connect his works with questions like, "How do you see yourself, what is behind? What do you hide, what do you reveal?"

Sailstorfer reworked twelve lead paintings for his solo show in Seoul, with the addition of make-up, which pushed these lead works in a new direction in which the chemical reaction between eye shadow and lead gives the work a life of its own. "Heavy Eyes" follows from an earlier series called "Heavy Tears", in which the addition of lipstick drops was added to the lead surfaces to symbolise tears.

To round out the thematic framing of heaviness/lightness, HEAVY EYES also contains seven cast light bulbs (BATTERIE), first moulded in wax – allowing a beehive to then revise the original cast at random – and then finally immortalized in bronze, which hang stoically from the ceiling. These "illuminate" the lead images and help the eyes to see. A bag and a pair of sunglasses from the fashion label Off White – both made of bronze – are placed on the terrace in Seoul. Here, Sailstorfer's “levity” again comes to the fore, and on a meta-level, the two designer objects can be understood as representations of the burdens of everyday life that one carries, and for the "mask" behind which one wants to hide one's eyes.... .