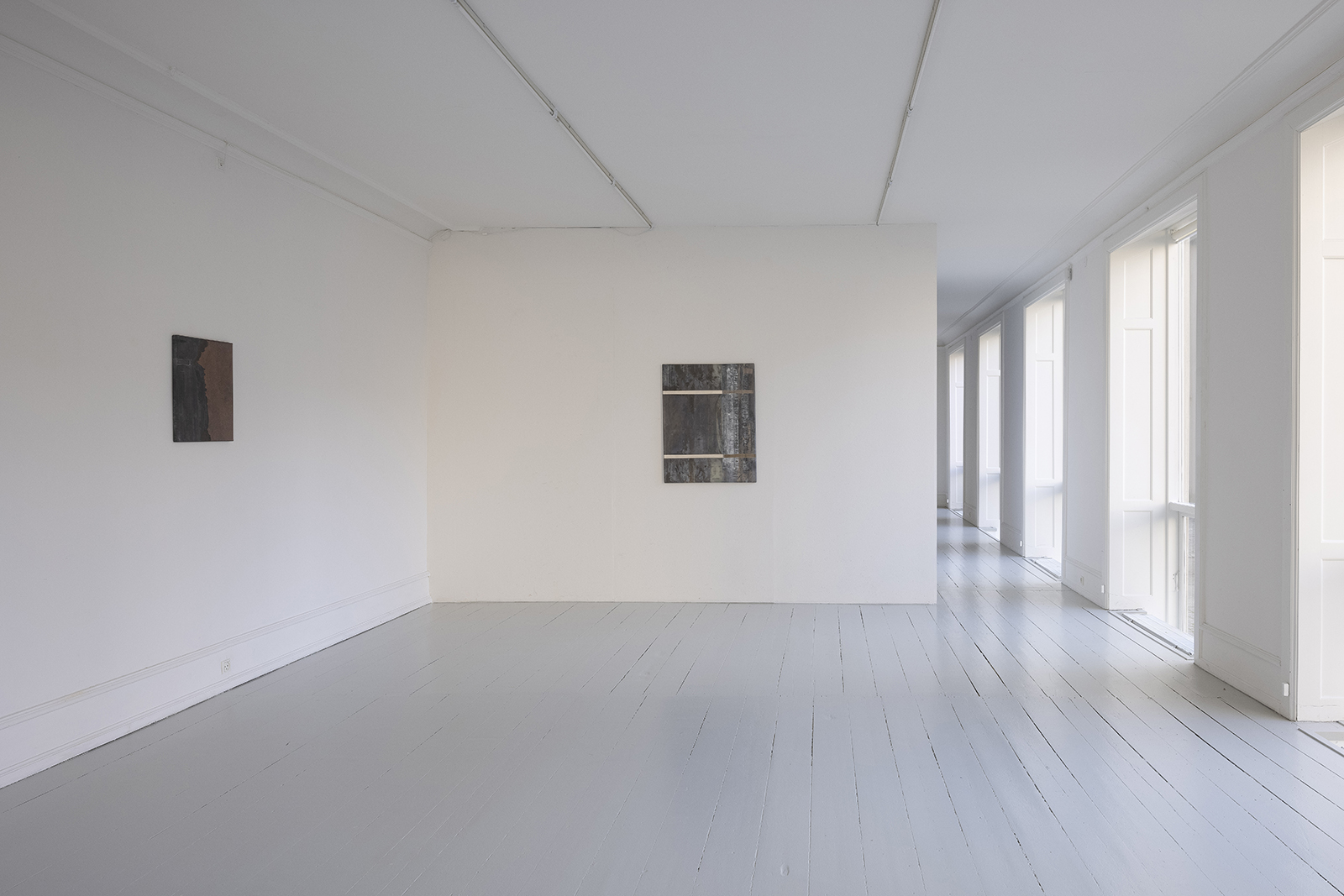 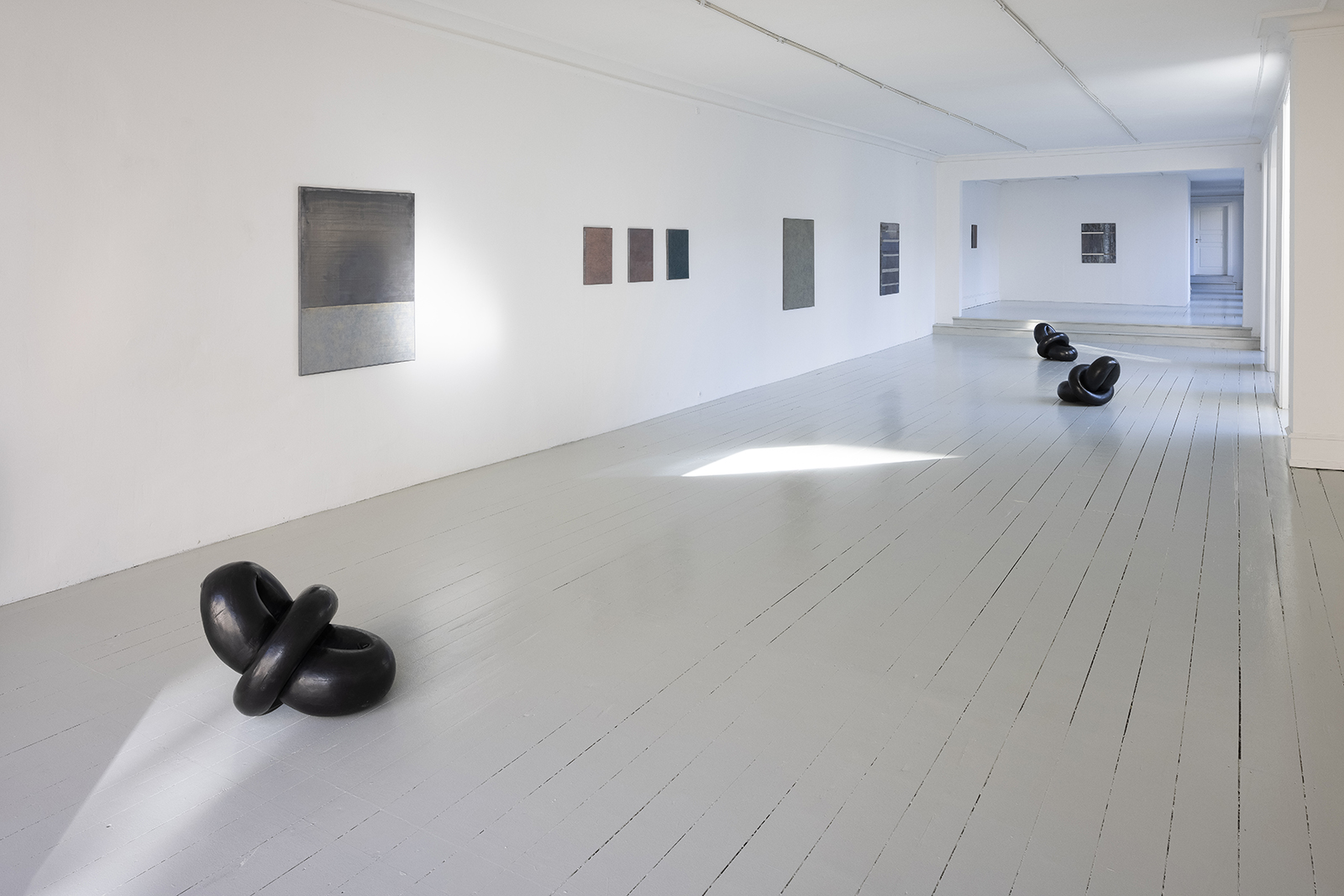 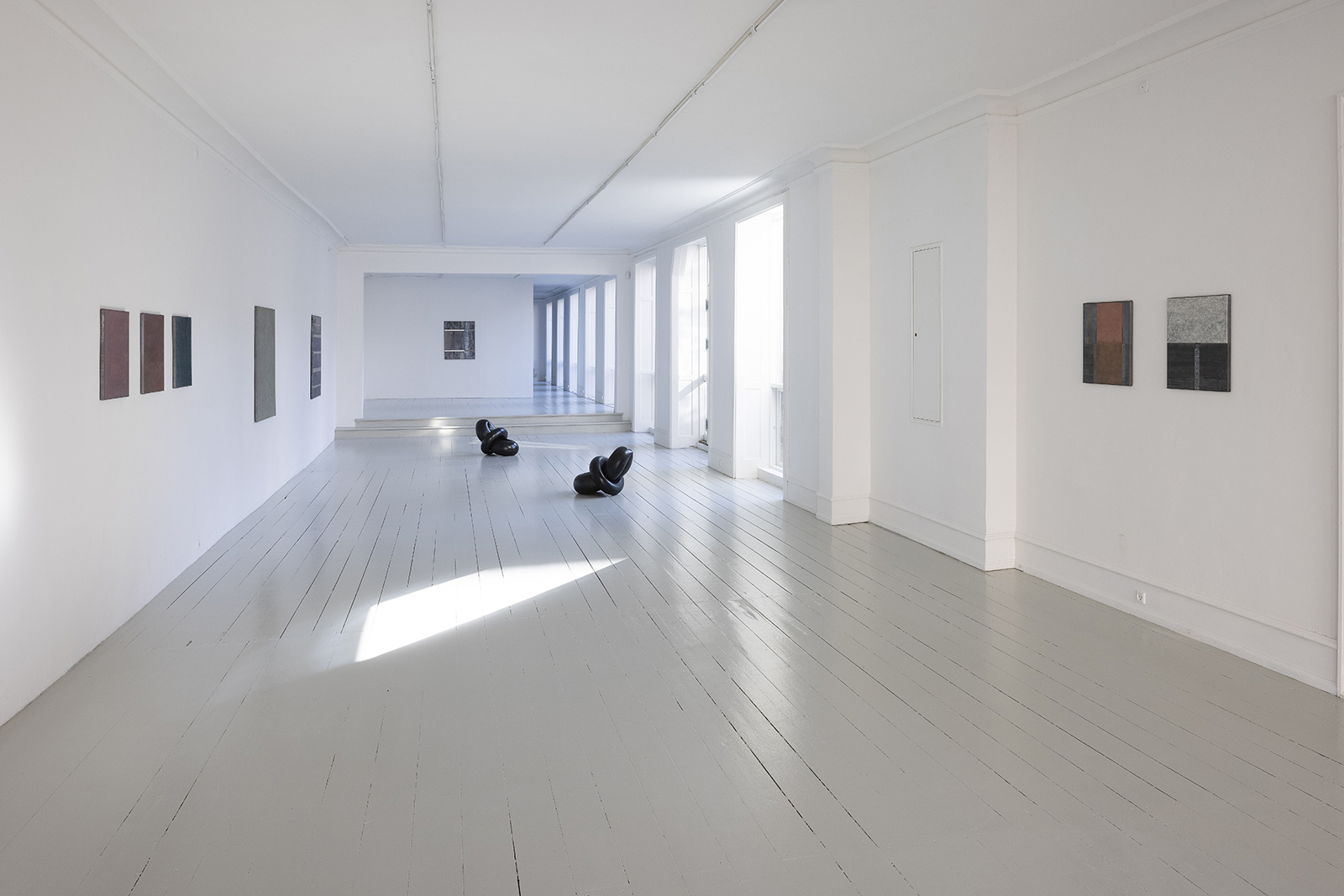 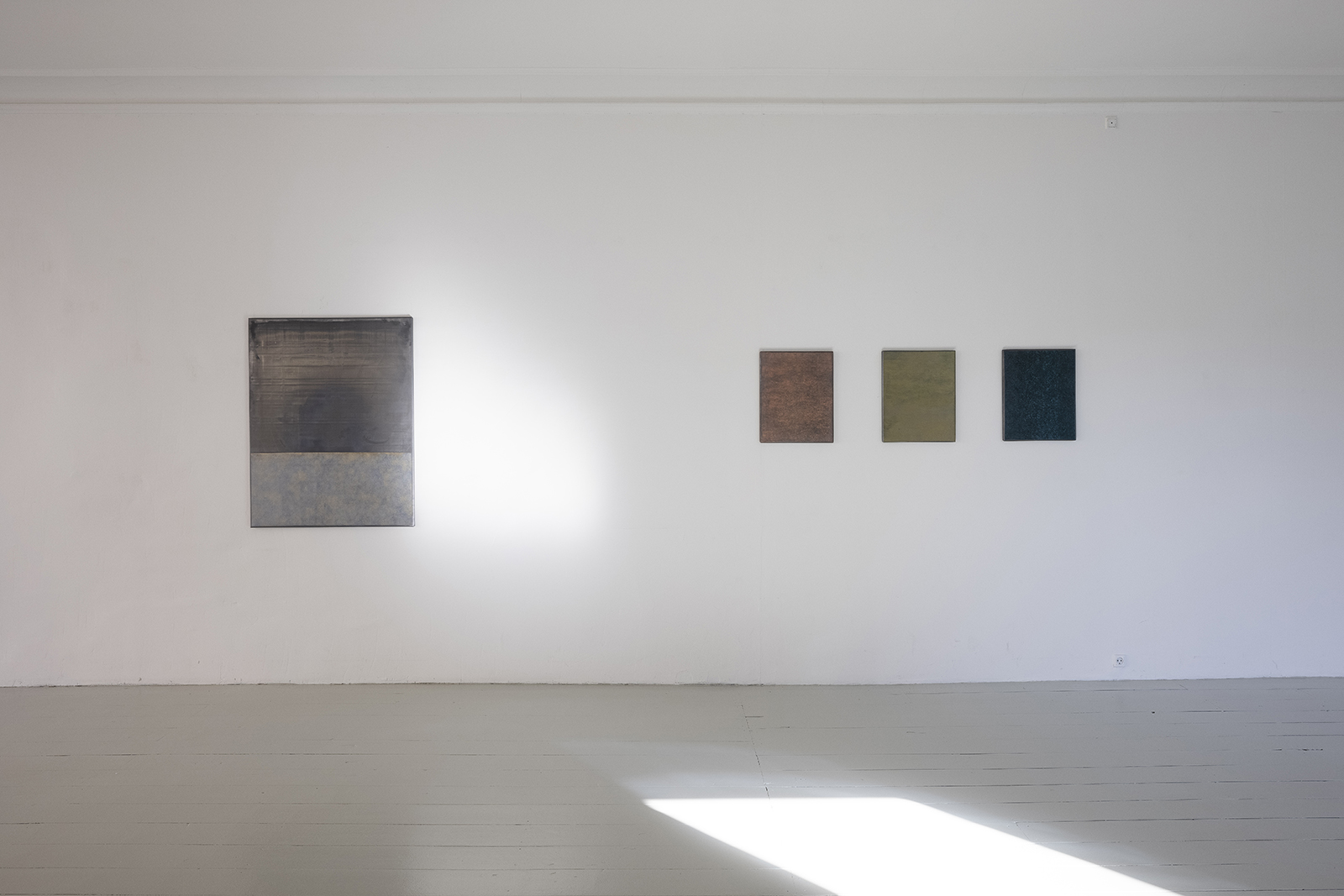 For his second solo exhibition at Avlskarl Gallery, Berlin-based artist Michael Sailstorfer presents a series of new works that distinctively follow his ongoing investigations into the transformative power of common materials, constructing associations between diverse themes that allow for seamless shifts between conceptual and metaphoric propositions. In Heavy Eyes, Sailstorfer explores the notion of “weight” in it’s many possibilities of understanding—from the perspective of the innately material or physical to the humanistic emotions of burden and sadness. In exploring these and other converging histories, we see again how Sailstorfer uniquely reinterprets material, form, and time, simultaneously building and releasing tension through multiple means.

The primary works included in Heavy Eyes are a new series of paintings created with lead sheet and commercially available cosmetics—specifically eye shadow. The combination of these materials may initially seem in patent opposition, but this is (of course) by design. Presented in a traditionally formal and modernist manner, these works refer to a number of diverse art historical contexts while simultaneously creating new aesthetic and metaphoric positions. As a German artist, Sailstorfer readily understands the history, implications, and use of lead as a material, specifically by a number of his fellow countrymen— Günther Förg, Amselm Kiefer, and Joseph Bueys, to name a few. As these artists focused on the issues and circumstances of their time, so also does Sailstorfer, albeit in his own distinctive and characteristic manner. If one were prone to a certain sense of humor, the work produced by the aforementioned artists could be characterized as quite “heavy” in political, social, historic, or personal terms. In establishing and working within a new tradition of interpretation and production, Sailstorfer both acknowledges and challenges these histories, finding an idiosyncratic balance somewhere between profound seriousness and light-hearted humor. In choosing the title for the exhibition, Sailstorfer makes direct reference to his choice of materials for this series, and the physical and metaphoric implications therein.

In many respects, the eyes have been a focus of artists over millennia, used in an attempt to not only refer to or reinforce an understanding of beauty but to understand the eye as a doorway or passage into the deeper recesses of the soul. As trite or as commonplace as this may be, Sailstorfer looks more deeply into this position, specifically related to a combination of materials that provide for a unique dichotomy both physically and allegorically. As a base, the use of lead brings many avenues for interpretation—its weight or heaviness, its toxicity, and the various ways it has been utilized throughout history. In a particular opposition we have eye shadow, something soft and feminine, used to create or augment beauty. But in the same way cosmetics can highlight and enhance what is already present, they can also cover or mask the unwanted, providing the user with a means to present a more desired projection of self. We may have tired eyes that we want to conceal, or hide in certain respects behind a “mask”. Therefore, this combination of material and specific use of color presents the viewer with an object that on one hand can be interpreted as deeply personal and containing the notion of choice, but also broaden to include more collective states of being that may be out of our control. Again, in the alteration and use of these materials, we are given objects that ostensibly present themselves within the boundaries of a known aesthetic. But upon further inspection and consideration of details, we have the capacity to shift our perspective, and understand Sailstorfer’s compelling objects and their complex personal, social, historic, and conceptual underpinnings.

Michael Sailstorfer was born in 1979 in Velden, Germany. He currently lives and works in Berlin. From 1999-2005, he studied at the Akademie der Bildenden Künste in Munich, and received his MA in Fine Arts from Glodsmiths College, London in 2004. He has participated in numerous solo and group exhibitions throughout the world.